Next short (1-2 min) demos are dedicated to 6APPEAL basic functions – the module parameters are adjusted in real time. Mr Mart Pauklin is playing Godin xtSA guitar, which has a piezo hexaphonic pickup.

Now we concentrate more on distortions. Also monophonic distortion (signal from mag pups) is mixed in at some point. In the end of the demo the sound is saved as a preset, what can be recalled later.

The guitar is changed to (Les Paul type) Fernandes Ravelle, fitted with Roland GK-3 hexaphonic pickup. The pickup is close to the bridge (as it is required for Roland equipment) and the direct analog sound from it is quite thin. 6APPEAL has two special Root Boost circuits in every channel, which may be switched ON/OFF and, when switched ON, can make the sound much bass rich for every string.

More sound from the Fernandes guitar fitted with Roland GK-3 pickup at close to the bridge: different distortion levels, panning of strings, modulations… No double tracking!

In the next 2 min demo Mr Mart Pauklin is jamming using ESP Viper guitar equipped with handwound hexaphonic pickup (made by luthier Halvo Liivamägi). 6APPEAL not necessarily needs to be driven by active pickups (like GK-3) and can deal well also with passive hexaphonic pickups (see some options from Features page). The difference in sound is remarkable. Not better, not worse, just different. As that is typical with analog equipment, the output sound depends on input (garbage in, garbage out…). We actually love the sound and have used part of the demo as our signature sound.

Finally we demonstrate 6APPAL Breakout Box feature. In the first half of this 2+ min demo all the channels (6 strings and mono from mag pups) are are recorded clean (through 6APPEAL) to Ableton Live. Godin xtSA guitar with piezo pickup is used – you may recognise the piezo sound. In the second (purpled) half some signal processing has been applied in Live (this way directly not related to 6APPEAL).

You may google internet to find user made demos. One of them made by Dylan Reznick demos well 6APPEAL modulation possibilities. There is also a lot of valuable information about 6APPEAL available in comments. 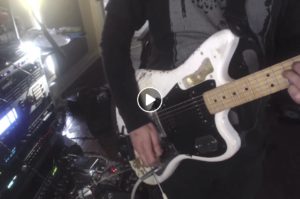 In the next two videos Sander Sinijärv is jamming with 6APPEAL using Schecter Ultra III guitar fitted with Roland GK-3 pickup. Just the pickup is mounted between mono pickups (shown in video), not next to the bridge (as the Roland recommendation). Put your headphones on! It’s one guitar in stereo and it’s fantastic that way.

More hard rock & blues approach in the next video.

In the summer of 2014 people from local guitar journal visited our office, together with guitarist Rainer Jancis, who jammed with 6APPEAL. In the beginning, using the same Schecter Ultra guitar, and, in the second part, Epiphone Les Paul, Roland GK-3 pickup just taped between mono pickups. Video by Kris Moor.
In the middle of the video Rainer is saying that the device sounds from some keys better than from others – probably has some resonances in… People have different ears and Rainer for sure has much more trained ears than us… We just think it’s the analog world, which is eternal in sound quality. Like the guitar itself…

The article about Spicetone and 6APPEAL was published in the 2014 summer issue (11/2014) of the journal “Kitarr” and can be read from their website. Unfortunately, just in Estonian, but our die-hard fans may try Google Translate…

Next our own Vahur is jamming with modulated sounds.

Finally, Vahur is comparing 6APPEAL to Big Muff mono distortion. It is quite long (8 min) video, to compare different sound aspects. But the principal difference about tonality should be obvious already from the first comparison.